Creation, Fall, and the Story of Adam and Eve
In God’s Image and Likeness 1 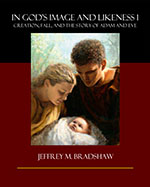 Formerly titled in the 2010 edition: In God’s Image and Likeness 1: Ancient and Modern Perspectives on the Book of Moses

The stories of the Grand Councils in Heaven, the Creation, the Fall, and the revelation of the Plan of Salvation to mankind are foundational to LDS doctrine. As it turns out, they are also the focus of a vast ancient literature by Jewish commentators, Islamic scholars, and early Christians, as well as the nexus of perennial controversies about science and religion.

This volume contains the most comprehensive commentary ever published on the beautiful and doctrinally rich early chapters of the book of Moses, combining prophetic insights, excerpts from ancient texts, current scientific perspectives, and up-to-date biblical scholarship—all presented from a perspective of faith.

Each section of the book is prefaced by an overview illuminating major themes and issues. This is followed by the text of each chapter of scripture, accompanied by a detailed phrase-by-phrase commentary designed to give the modern reader both an understanding of the plain sense of the words as well as their significance in context. Based on the first complete transcriptions of the original manuscripts of the Joseph Smith Translation, significant textual variants are identified and discussed.

Of special interest to LDS readers is the light that the book of Moses sheds on temple worship. A detailed study of this book of scripture in conjunction with ancient and modern sources suggests striking parallels with temple themes. Insights on these topics from LDS scripture and prophets, as well as relevant extracts from the works of Hugh Nibley and other religious scholars, historians, philosophers, scientists, literary specialists, playwrights, musicians, and artists are found on nearly every page of the book.

The book also features an extensive annotated bibliography on ancient sources—including Near Eastern texts, early Old Testament manuscripts and translations, the Old Testament Apocrypha and Pseudepigrapha, the Dead Sea Scrolls, Jewish and early Christian texts, Nag Hammadi and Gnostic writings, and primary documents from the Zoroastrian, Mandaean, Manichaean, and Islamic religious traditions. An additional highlight is the collection of more than a hundred carefully chosen color and black-and-white figures and illustrations relating to the text—themselves also the subject of detailed commentary.

The central message of the book of Moses is not revealed in its stories of the Creation and the Fall, as essential as these accounts may be, but rather in its invitation to join the divine pattern whereby we may come to fully reflect God’s image and likeness. This wondrous work of scripture has been expressly written to “call [us] out of darkness into his marvelous light” (1 Peter 2:9).