Enoch and the Gathering of Zion: The Witness of Ancient Texts for Modern Scripture (Fall 2021) 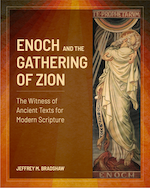 Latter-day Saints have long been fascinated and inspired by the Book of Moses story of Enoch. Within its two lengthy chapters is the closest thing to a full biography we have in the Book of Moses. And what a biography! Moses 6–7 detail his call, his teaching mission, his glorious vision, his miraculous victories in battle, and the ultimate ascent of the city of Zion to the bosom of God. But did you know that Latter-day Saint scholars, beginning with Hugh Nibley, have begun to find pieces of what often seem to be new and authentic elements of Enoch’s story in fragments of ancient documents that have turned up with astonishing frequency over the last several decades?

Among the most significant of these documents is a Dead Sea Scroll text called the Book of Giants. Although the combined fragments of the Book of Giants scarcely fill three pages in one popular translation, we find in it the most extensive series of significant resemblances between a single ancient text and Joseph Smith’s account of Enoch’s preaching mission and subsequent battles with his enemies. These resemblances range from general themes in the story line (secret works, murders, visions, earthly and heavenly books of remembrance that evoke fear and trembling, moral corruption, hope held out for repentance, the crying out of the earth, the gathering of the righteous, and the eventual defeat of Enoch’s adversaries in battle—ending with their utter destruction and imprisonment) to specific occurrences of rare expressions in corresponding contexts (the reference to a “wild man,” the name and parallel role of a character corresponding to Mahijah/Mahujah, and the “roar of the wild beasts”). Though there is admittedly an abundance of chaff mixed with the wheat in the ancient Enoch literature, unlikely discoveries of even a few grains of such wheat sometimes may be of great significance.

With the help of the Book of Giants and other ancient texts, we are now in a better position than ever before to assemble the most complete, authentic, and detailed biography of Enoch to appear in modern times. In our day, when humble heros and visionaries are often scorned and mocked, we need to understand the story of Enoch more than ever. After all, we are to be, like Enoch’s people, fully engaged in making the scriptural vision of Zion a reality.